In 2018 Saintcon was emphasizing minibadges and I had been recruited to make a minibadge for the temporary pop-up hacker space known as Hak-in-the-box. In 2017 they were the only group to make a tall minibadge and this year they wanted to keep the trend of making something different than anyone else and thus the macrobadge was created.

I specifically designed it to cover a majority of the badge to make it stand out from any other minibadge. I also decided that since it was pretty large to also include two DEF CON SAO ports for anyone who wanted to use them. From what I saw during Saintcon it was the only minibadge that was not made by someone on the badge team that supported I2C without breaking the main badge. Once per minute it would scroll HakintheBox across the display and it could change brightness to match the main badge as well as display notification lights for a change in the wearers hackers challenge score, but the hak-in-the-box badge was having difficulties supporting both I2C and the neopixels on it because the microcontroller was not made to do that much so the neopixels would crash occasionally and so compukidmike, the badge maker, decided to remove support for the brightness and notifications in an attempt to fix the crashes, so with the default firmware on the official Saintcon badge the brightness not longer worked.

It came in 4 colors, white and blue for attendees and black and red for donors and staff. 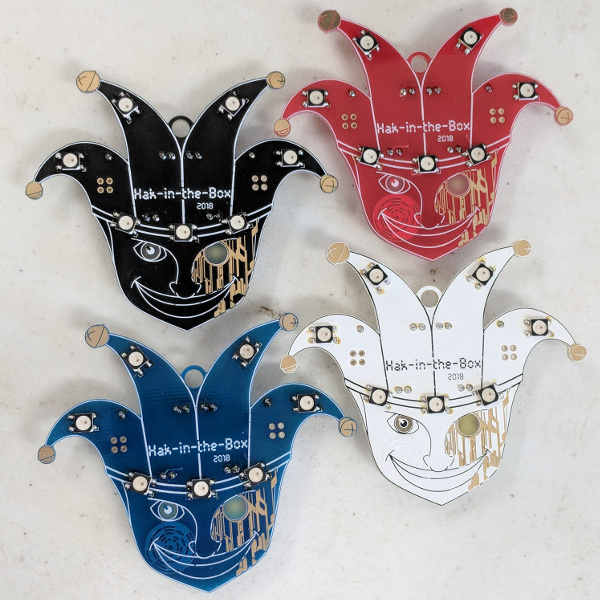